Should I use cash or credit? ARM loan or fixed rate? Ten percent down or twenty percent? Should I pay down debt or keep a cash reserve? These are all good questions, and here’s some of the answers. 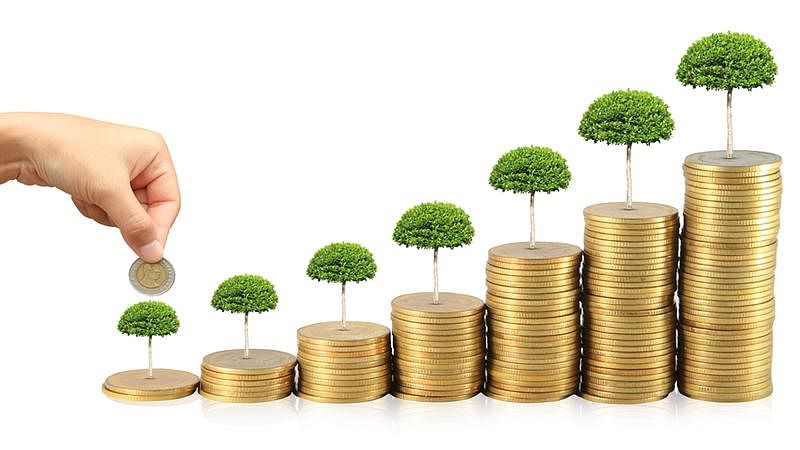 Cash vs. Credit: The Concept of Leverage

In order to understand real estate financing, it is important that you understand the time value of money. Because of inflation, a dollar today is generally worth less in the future. Thus, while real estate values may increase, an all-cash purchase may not be economically feasible, since the investor’s cash may be utilized in more effective ways. Leverage is the concept of using borrowed money to make a return on an investment. Let’s say you bought a house using all of your cash for $100,000. If the property were to increase in value 10% over 12 months, it would now be worth $110,000. Your return on investment would 10% annually (of course, you would actually net less, since you would incur costs in selling the property).

If you purchased a property using $10,000 of your own cash and $90,000 in borrowed money, a 10% increase in value would still result in $10,000 of increased equity, but your return on cash is 100% ($10,000 investment yielding $20,000 in equity). Of course, the borrowed money isn’t free; you would have to incur loan costs and interest payments in borrowing money. However, you could also rent the property in the meantime, which would offset the interest expense of the loan.

Taking leverage a step further, you could purchase ten properties with 10% down and 90% financing. If you could rent these properties for breakeven cash flow, you would have a very large nest egg in 20 years when the properties are paid off. Balance that with what you could make by investing the cash flow on one free and clear property for 20 years. And, of course, look at the potential risk of negative cash flow from repairs and vacancies on ten properties. Finally, consider the tax implications – if you have cash flow, you have taxable income; if you have increase in equity, there’s no tax until you sell.

On a similar note, the size of your down payment will affect your cash flow on rental properties. Let’s consider two examples.

Which is better? Well, it depends on what your goals are and what the rest of your financial picture looks like. Let’s say your goal was to hold the property for 10 years. In the first example, you have $200/month cash flow, but no cash reserve. In the second example, you would have $100/month negative cash flow, but you have $20,000 in reserve. The knee-jerk reaction of some people is that example #1 is safer. But is it really?

Think about it… in the first example, if your property becomes vacant for one month, you’d be out of pocket $600. It would take three months to make that up. In the second example, you have $20,000 in cash cushion to make up the deficit. With $20,000 in the bank, you could handle $1200/year negative cash flow for 16 years. If the property were in an appreciating market, you’d come out fine, even with negative cash flow. Another factor is the choice of loan. You could buy a property with nothing down and an interest-only loan fixed at 5% for three years. If your exit strategy is a lease/option that should cash you out within 36 months, why do a fixed-rate loan?

For years, our parent’s generation discouraged debt as a “bad” thing. For some investors, the goal is to own properties “free and clear,” that is, with no mortgage debt. While this is a worthy goal, it does not always make financial sense. If you have free and clear properties, you will make certain amount of cash flow and pay a certain amount of income tax. If you need more cash, you are forced to sell the asset, creating a taxable gain.

If you refinance a property, there’s no taxable event. And, since mortgage interest is a deductible expense, the investor does better tax wise by saving his cash. Think about it… the higher the monthly mortgage payment, the less cash flow, the less taxable income each year. While positive cash flow is desirable, it does not necessarily mean that a property is more profitable because it has more cash flow. More equity will obviously increase monthly cash flow, but it is not always the best use of your money. On the other hand, paying down debt may make sense if you can’t get a higher return elsewhere in the market. Also, if paying down debt can have other rewards, such as bringing a loan below 80% LTV, you may be able to cancel private mortgage insurance and save additional money.

In Short, Don’t Rely on Assumptions… Do the Math!

Closing on a new home can be one of your most memorable life moments. It’s the final and one of the most critical stages in the home-buying journey, but with the exchange of key paperwork and a sizable down payment, it can also be a stressful experience, especially for first-time homebuyers.

The FBI has reported that scammers are increasingly taking advantage of homebuyers during the closing process. Through a sophisticated phishing scam, they attempt to divert your closing costs and down payment into a fraudulent account by confirming or suggesting last-minute changes to your wiring instructions. In fact, reports of these attempts have risen 1,100 percent between 2015 and 2017, and in 2017 alone, there was an estimated loss of nearly $1 billion in real estate transaction costs.

While it’s easy to think you may not fall for this kind of scam, these schemes are complex and often appear as legitimate conversations with your real estate or settlement agent. The ultimate cost to victims could be the loss of their life savings.

Here’s what you should know and how to avoid it happening to you.

How to avoid a mortgage phishing scam

What to do if it happens to you

While it can be easy to think you’ll never fall for a scam of this nature, the reality is that it’s becoming more and more common, and the results can be disastrous for eager homeowners. By being mindful and taking a few important steps ahead of your closing, you can protect yourself and your loved ones.

To learn more about the closing process, including how to prepare for your closing and common pitfalls to avoid, check out our Mortgage Closing Checklist . For information and resources for the each stage of the home-buying journey, visit the Bureau’s Buying a House tool.

Campaign ads are already airing. Debates and town halls are being held. Democratic primaries and caucuses are underway. Some eight months away from voting day, the 2020 election cycle is ramping up. However, while some presidential hopefuls are laying out their housing policies, the impact of the electoral process on residential real estate is yet to fully unfold.

Across the nation, the market still seems set on its normal trajectory. In January, nationwide inventory continued to decline, while median listing price climbed to nearly $300,000. According to realtor.com, last month marked a re-acceleration in price gains, as an increasing number of cities posted yearly growth of over 10%.

Still, research and industry experts agree that the closer the election gets, the more likely its effects on housing, regardless of who the candidates are. In general, presidential races breed uncertainty in the housing market, which alters attitudes among home shoppers, sellers and investors and, thus, sways sale volumes and values.

“Why [presidential elections] affects the market more than any other elections is simply because people fear change,” says Matt Laricy, managing broker of The Matt Laricy Group in Chicago. “Whenever people get nervous, they don’t make rational decisions. They make emotional decisions.”

On a large scale, though, that behavior tends to mature with the progression of the election year and intensifies in the second half of that year.

How predictable the outcome of a presidential election appears to be can also influence real estate sentiments. When an incumbent arises as a likely winner, cementing the continuation of familiar policies, the housing market may experience less jitters, said Arlene Reed, a real estate agent with Warburg Realty in New York City.

When the election result evades easy forecasts, “people get a little tentative,” Reed says. “There’s some uncertainty how the new president’s policies will affect the economy, the stock market, taxes.”

Sales slide down, but prices may not budge

In a recent study that analyzed the last 13 presidential election years, which stretch back to the 1980s, Meyers Research, a housing consultancy firm, found out that new home sales record a drop in median sale activity of 15% from October to November, when the nation chooses its president. In the year following the election, the traditional seasonal decline in the sales of new construction abodes is only 8%.

Appraiser Jonathan Miller, owner of Miller Samuel, made a similar observation for Manhattan’s co-op sales in a data crunch he originally conducted for the real estate publication The Real Deal. Between 2008 and 2019, co-op sales began to dip in July of federal election years (both midterms and presidential elections), leading to a nearly 13% weaker market in September.

“Even though the election is at federal level and we’re looking at the local market, it’s still very visceral to consumers,” Miller says.

In most markets, though, the rebound is quick, if not instantaneous as pent-up demand gushes out after clarity dawns in the Oval Office.

“In December [following an election], and in the following year, the sales that are lost during November are recovered,” says Ali Wolf, director of economic research for Meyers Research. “It isn’t that consumers say, ‘I’m nervous, and I never want to buy.’ They say, ‘I’m nervous. Let’s just wait to see how things play out.’” 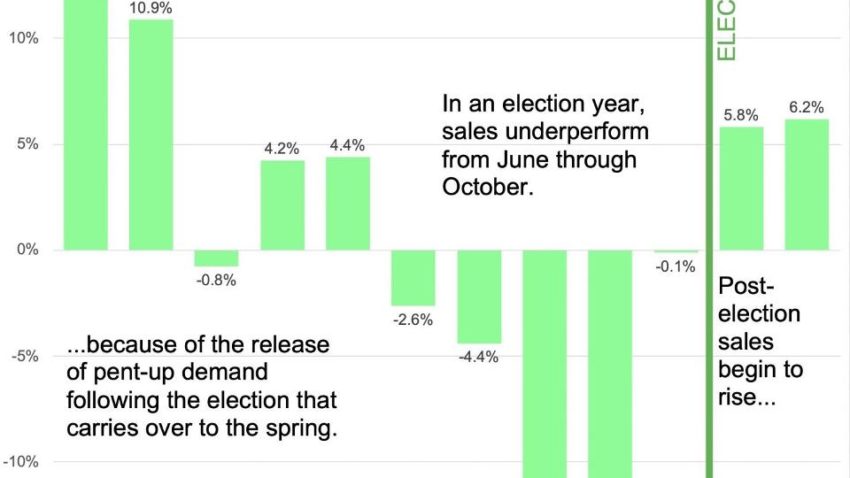 The impact of presidential elections on prices seems less clear-cut. Because any fluctuation in sale volumes occurs for only a limited number of months, prices may not have enough time to reflect that change. In New York City, Miller says, “it really takes anywhere from one to two years in sales pattern to have a permanent change or a significant change in price direction.”

This year, Daryl Fairweather, chief economist at online brokerage Redfin, says prices may not budge much, buoyed by a consistently tight inventory. Fairweather said that “prices are pretty stable.”

Lawrence Yun, chief economist at the National Association of Realtors and fellow Forbes.com contributor, echos that assertion, saying that he “hope[s] the price increase in 2020 is more moderate at 3% or 4%,” compared to past years.

If prices do post smaller gains in 2020, however, the presidential election might be one factor for that. In 2012, analyzing data by the California Association of Realtors, Movoto, a real estate technology company, concluded that in presidential election years price appreciation falls about 1.5% behind the gains made in the year preceding and the one following the vote.

The effects of presidential elections on residential real estate usually reverberate louder in the upper echelons of the market. Yun says, “Upper-income people will probably wait until after the election compared to more middle-class, everyday people just because any changes to a new tax law or new regulations could have a bigger impact for them.”

During a presidential election, many foreigners also choose to postpone purchasing property in the U.S. as the rules that govern the tax and residency implications of such an action could change with the arrival of a new administration. Laricy says he has several international clients who have already decided to wait out the outcome of the November vote.

However, with today’s favorable economic outlook when it comes to mortgage rates, unemployment and consumer confidence, the upcoming presidential election might do little to impede first-time buyers or those shopping for lower-to-median values homes.

“They’re really more concerned about, ‘Do I have a job? Is the economy going to continue to grow?’” Wolf says. “Who gets elected can impact that but as long as there’s not some wild policy, those groups will generally continue to fare well in an election year or not.”