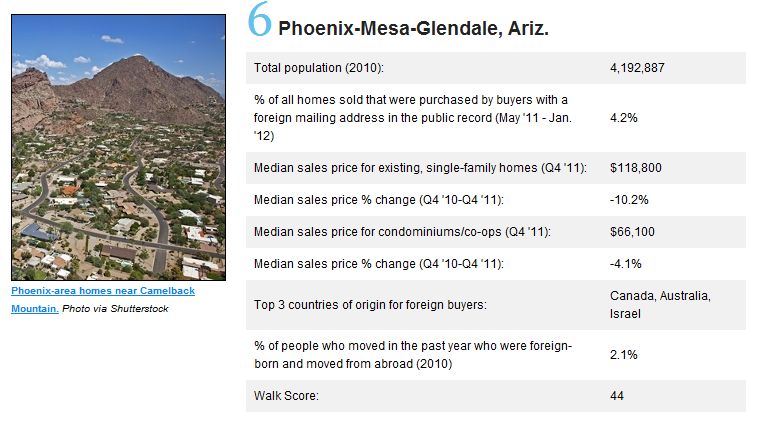 International buyers accounted for 4.2 percent of Phoenix home sales between May 2011 and January 2012, with 90 percent of them from Canada, according to public records analyzed by DataQuick.

Resale condos were proportionally the most popular property type in both counties: buyers listing non-U.S. mailing addresses purchased 9.7 percent of resale condos in Maricopa and 12.2 percent in Pinal, according to DataQuick.

Foreign investment clients see the current return on investment, combined with investing in the U.S., as superior to other areas and they look forward to future appreciation in the Phoenix area. Our warm climate is also desirable to foreign investors.

The (Canadian dollar to U.S. dollar) conversion rate is good. Homes in Phoenix are still cheap — although that has changed in recent months.

Most of foreign clients are looking for investments to make monthly returns between 6 (and) 10 percent for the short term, and then sell for a profit when the market price is up in five to 10 years. If they are purchasing a second home, they want to take advantage of the lower prices and favorable conversion rate. They will use the home as a vacation/winter home now, then eventually retire here.

According to statistics from real estate data firm The Information Market, Canadian buyers were virtually non-existent in the Phoenix real estate area from at least 1999 until the fall of 2007. In 2008 they hovered around 2 and 3 percent of the market, but it wasn’t until December 2009 that they hit more than 4 percent of the market and have since more or less stayed above that threshold.

From the beginning, Canadian real estate appraiser and U.S. real estate investor Richard McMahon said he knew he wanted to invest in a distressed U.S. market with low prices and the potential for retirement-income generation that would far exceed any yield from a bank savings account.

“Also, having a source of U.S. funds is a good hedge against the Canadian dollar,” McMahon said.

An American real estate expert, whose name he said he can’t recall, also gave him some valuable advice.

We recommended that he invest in a city that has well-known universities and at least three professional sports teams and has a leisure component to its economy. Presto, Phoenix!

He said he wasn’t worried about the legal or tax implications of buying real estate in the U.S. because he’d read “South of 49: The Canadian Guide to Buying Residential Real Estate in the U.S.”

He and his partners have so far bought four homes in the Phoenix area, all for long-term investment.

“We do not mind whether it is a short (sale) or a bank property. The first two need some work (while) the last two were near move-in ready. We initially were looking for condos but ultimately chose houses due to their low vacancy and price points (compared to condos),” McMahon said.

Though still high by national standards, in 2010 the Phoenix area had the third-lowest vacancy rate among the 10 markets in this report, at 16.5 percent.