Nationwide, banks are agreeing to more short sales, and for the first time, short sale transactions are exceeding foreclosure deals, according to the most recent housing data from Lender Processing Services (LPS) Inc.

In January, short sales made up 23.9 percent of home purchases, according to LPS. Meanwhile, foreclosures made up 19.7 percent of sales.

Just one year prior, foreclosures made up the bulk at 24.9 percent of transactions while short sales made up 16.3 percent.

So why are banks getting more agreeable to short sales? Banks are realizing that short sale transactions usually sell for higher prices than foreclosures. In fact, foreclosed homes tend to sell for 29 percent less, on average, than comparable non-distressed properties. Short sales tend to sell at a 23 percent discount, according to Lending Processing Services data from January.

Banks and government agencies in recent weeks have taken steps to speed up the short sale process, setting new timelines for how long mortgage servicers have to respond to short sales offers. Also, some banks, such as Wells Fargo and JPMorgan Chase, are even offering some home owners cash incentives — up to $35,000 — if they agree to do a short sale instead of let the home fall into foreclosure. 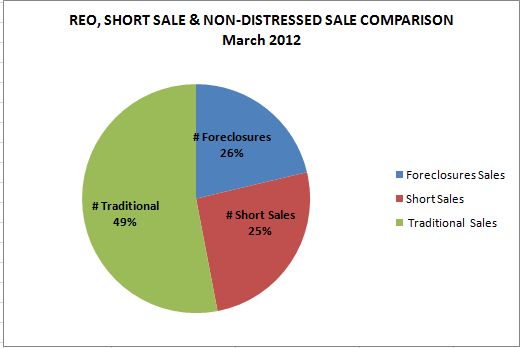