There Is No Absolute Right to Smoke

Tenants don’t have a universal right to smoke in their rentals. There is no law, either state or federal, that provides people with the freedom to smoke when and where they want. Nor are bans on smoking discriminatory: State and federal laws prohibit discrimination on the basis of certain attributes (such as age and national origin), but being a smoker isn’t one of them. 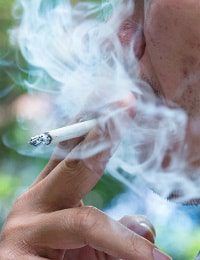 In fact, states, cities, and the federal government can place restrictions on all types of smoking. However, the laws regarding how, what, and where people can smoke vary.

The federal government has the power to regulate almost any substance you might consider smoking, including tobacco and controlled substances such as marijuana.

Tobacco. Smoking tobacco is legal under federal law. The federal government doesn’t restrict its use in private rentals but does restrict it in public housing. The U.S. Department of Housing and Urban Development (HUD) requires all public housing agencies (PHAs) to prohibit certain tobacco products:

HUD makes all PHAs ban the use of cigarettes, cigars, pipes, and water pipes but allows PHAs to decide whether to prohibit e-cigarettes. Each PHA can also decide to be entirely smoke free or create stricter anti-smoking rules than HUD’s. No matter what, if you live in public housing, you won’t be able to smoke in your unit.

Marijuana. Using and possessing marijuana for any purpose (including medical reasons) is illegal under federal law. Because it is a banned substance, using it anywhere—even in the privacy of your rental unit—exposes you to the possibility (even if remote) of being charged with a federal crime.

States and cities have the power to pass laws and ordinances that protect the health and safety of the public. This power includes the ability to restrict or ban smoking in rental properties.

Many states and cities have laws that prohibit or limit smoking in or around multiunit buildings due to the fact that smoke migrates so easily across shared spaces. In some areas, even buildings with as few as two units are considered multiunit for these purposes. Often, if the law doesn’t ban smoking altogether, it prohibits it in a certain percentage of units or in shared spaces such as common areas and parking lots. It’s also possible for a state or city to pass a law banning smoking in all rental properties—even single-family homes.

Most state and local anti-smoking laws clearly define what activities are considered smoking. For instance, a law might prohibit the use of pipes, cigars, and cigarettes. When a law is unclear about the definition of smoking, though, it’s probably safe to assume that it applies to anything that involves lighting or heating and inhaling the substance. Many anti-smoking laws also apply to vaping and using electronic smoking devices such as e-cigarettes.

Marijuana. If marijuana is illegal in your state, state and local anti-smoking laws definitely apply to it. If, on the other hand, marijuana for medical or recreational purposes is legal in your state, you’ll need to look at the relevant statute or ordinance for guidance. Some anti-smoking laws carve out an exception for smoking medical marijuana. Others define “smoking” as involving, or even define “tobacco” itself as, any plant matter that can be smoked. Many others are silent on the matter. To find out what the law is in your area, do an Internet search for “anti-smoking laws” or “smoking ban” where you live, or contact your city manager’s office.

Although landlords who manage properties subject to laws that limit or prohibit smoking should attempt to inform tenants of the rules, it’s the tenant’s responsibility to be aware of and comply with the law.

Landlords Have the Right to Restrict Smoking

Even when there’s no applicable anti-smoking law, landlords can limit or prohibit smoking anywhere on the rental premises, including individual units. Health concerns about secondhand smoke aside, landlords often prohibit smoking in an effort to limit fire hazards on the property, reduce fire insurance premiums, and avoid stains and odors. Landlords might also prohibit smoking to avoid lawsuits—tenants have sued landlords who allow smoking on various legal grounds, such as:

Landlords typically inform tenants of a no-smoking policy or smoking restrictions through a clause in their lease or rental agreement. Most likely, such a clause applies to smoking of any sort, not just tobacco, but if you’re not sure, ask your landlord—preferably before you sign anything. However, even if your lease or rental agreement doesn’t mention smoking, you should familiarize yourself with any state and local smoking laws, as they might apply regardless of what’s in your lease.

Can a Landlord Evict a Tenant for Smoking?

Landlords might also be able to end a tenancy or evict based on a lease’s or rental agreement’s “illegal activity” clause. Again, under federal law, possessing and using marijuana is a crime. Whether a landlord will be able to evict a tenant for smoking marijuana based solely on the illegal activity clause depends on the circumstances. Many judges won’t evict when the tenant doesn’t have a history of breaking the law and the illegal act is relatively minor (especially if marijuana is legal under state law).

If you plan to smoke in your unit, it’s best to find out the smoking policies before you sign a lease or rental agreement. If a landlord tells you that you’ll be able to smoke in your unit, make sure you get that statement in writing. Otherwise, don’t enter into a lease or rental agreement knowing that you’re going to violate the no-smoking rule. Hold out for a rental that meets your needs—the risk of legal hassles or even eviction just isn’t worth it.